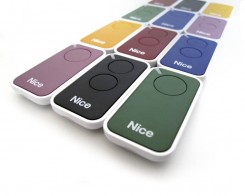 The colourful new line 2 channel min gate transmitters are available in six colours.
The complete line of portable miniaturised transmitters with the management of identity codes and certificates, self-learning and receiver
built-in proximity.

Evolved: uses data processing and recognition systems that increase its degree of security and deliver a threefold reduction in automation response times.

Easy memorisation, even at a distance, thanks to Opera receivers. There are two options for enabling a new Inti mini gate transmitter, even at a distance from the system:
• using a transmitter already programmed in the receiver, thanks to the enabling Code exchange between the two
• using the Nice O-Box connection interface; the receiver’s Certificate is entered by just placing the new Inti next to the O-Box and following the guided procedure on a PC or PDA Safe, if a transmitter is stolen or lost, with the O-Box the user can:
• replace it, maintaining the same functions as in the previous one;
• disable the old transmitter by increasing the priority level on the new Inti.